(the rantings of a science fiction freak) 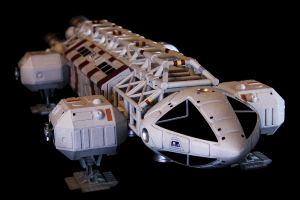 While not the most aesthetically pleasingly shaped spacecraft ever conceived, the Space:1999 Eagle was at once functional, versatile and durable. The Eagle retained the realistic look of late 20th century NASA hardware, while adding a few believable enhancements such as the modular body section which could be detached and switched.

The Eagle was used for both deep space exploration and planet-side landing missions and functioned well in either application.