Hugh Hitchcock
ATTENTION: IF YOU ARE SMOKING,
PLEASE MAKE SURE IT'S NOT BECAUSE YOU ARE ON FIRE.

A Barn Dance with Bob Seger 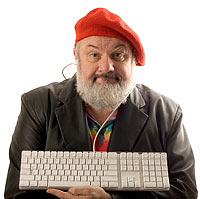 It was August 1974; in Washington, Nixon was resigning, and in Washtenaw County, we were rejoicing. I was playing bass with the Martian Entropy Band, and we got a gig to perform in a funky barn on some property overlooking Ford Lake. The lineup was us, the Rabbits, the Rockets, and Bob Seger. Our light show, the Light Opera, also got involved, projecting psychedelia across the dance area from one loft to the other loft, where the stage was set up. The promoter was someone named Whitey, as I recall, and he threw the show together as a bid to get into concert promotion. He printed up some flyers using recycled Fillmore Auditorium poster art [nope, original art with the bands' logos, seen below - I must have confused this poster with another] called it a White House [actually, Dr. White Post, see corrections below] production, and got things moving.

Five dollars a head, all the beer you could drink, and Bob Seger: what's not to like? We arrived early on a Saturday afternoon and set up our gear and lighting apparatus. I then retired to an adjoining lawn, where I fell asleep under a tree. I woke up to discover a monkey grooming my arm. He was a pet of the people who owned the barn, and they had leashed him to the tree while they went about their business. The day was off to a rollicking start. The evening went very well up to a point. The Rabbits, led by Ann Arborite Martin Simmons (who was later to play in my outfit, the Gene Pool Band) opened the show, and we followed.

Half-way through our set Seger's manager told us we had to cut our time, so we didn't get to complete our meticulously-organized set list. With much grousing, we wrapped up and left the stage. Seger followed us, much to the surprise of all, as he was supposed to be headlining. It turned out that he had changed the lineup so he could get back to Detroit before it got late. The light show had projections readied for the Rockets, so Bob came out against a background of NASA slides. Our keyboard player Hugh Hitchcock was so incensed about our having our time cut that he climbed up into the lighting booth and convinced the lightshow to carry on with the slides planned for our set. So there was Bob Seger, wailing away, while in the background, slides of spaceships towing blocks of cheese were sailing back and forth. Seger's manager put a stop to that pretty quick, but it was pretty funny while it lasted.

Seger had a small band at the time and played most of his early hits. Then he did a solo set with just him and a piano. He sang "Railroad Days," a song about growing up in Ann Arbor. I talked to him a bit after his set, the conversation revolving around how bad the monitor speakers were.

After Bob, the Rockets took the stage and amped things up several notches. These guys were rock mainstays in the Detroit area in the 1970s and 1980s and were just hitting their stride at this time. By now the barn was packed. A loud, sweaty time was enjoyed by all. Then the police arrived, and things got even more exciting. It seems that Whitey had neglected to get a permit for dispensing alcohol at the party, and when the police arrived to respond to a noise complaint, it all hit the fan.

I was up in the loft with the light show when someone came running up with a box full of liquor bottles and a request: "Quick! Hide these! The cops are here!" We stashed the bottles in our road cases and looked out the back of the barn to see people madly rolling beer kegs down the hill into Ford Lake. I was later told that the plan was to send divers down the next day to retrieve these; unfortunately, the story went, Ford Lake turned out to be hundreds of feet deep and those barrels are still down there. (Research by the Observer's crack geology team has since discovered a depth of 40 feet, so the barrels are buried in layers of silt, is my guess.) We managed to escape with our gear intact, and enjoyed the booze in the weeks that followed. I think that was it for Whitey's music business career, but I'll always remember that gig as a high point of my rock 'n' roll days.

Once the article saw print, I received some nice additional information:

"... I just wanted to comment on the article in the march 2007 observer. I lived at the farm on ford lake during this party with two other room-mates. The name of the production company associated with whitey was "Whitepost productions" not "whitehouse". My friend, Steven J. Post who passed away on November 1, 1992, was the partner to Whitey during this period. 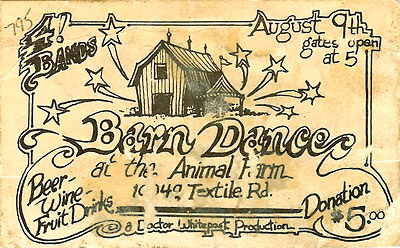 Steve Kolman provided this lovely image of the ticket!

Just a little history about my friend. The property at the corner of Textile road and Bridge road was originally used by the Lake family to build "Lake Pontoon Boats". During this period, the Post Family lived in the Farm house on the property. Steven grew up here and later in Manchester, Mi. He went to LIncoln High School and later became a stained glass business owner in Depot Town, Ypsilanti. It was because of the association with the current owners of the property, that we were able to move into this farm house.

Steve was a very vibriant person who was later nicknamed by Peter Lawson of Ann Arbor as Monsiere. His plunge into promotions was fueled by Whitey"s interest in live documentation of concerts and which later became "Caught in the Act".

I just didn't want history to write out Steve Post (who by the way owned "Dykewonder" the pigtailed McCock Monkey you mentioned). The monkey was previously owned by Faizzy "The renowned Pizza parlor owner seen many times with Mohammad Ali and such in the late 80's and 90's.

Thank you for the great article you wrote and I hope you continue to document old times in the 70's and 80's around town. Sincerely yours,

It's with some pride that I read your missive on our party on Textile Rd. A friend of mine forwarded your article to me; lots of memories go with living at that house. A few additions might be of interest to you (or not). Bob Whitall partnered with one of my house-mates Steve Post and they called their enterprise Whitepost. Bob's sister was the rock and roll reviewer for the Detroit Free Press at the time.

Although MI law did not require a special permit to have beer at a party, it only applied if there were less than seven kegs. I know we were way above that (I think about 20 kegs were purchased).

We made sure we had our lawyer present and when the State Police arrived and took Steve into the back seat, the lawyer had him out in no time.

We had thrown several parties of lesser size, mostly at Martin Place in Ypsi. There was a little hall there and we would get beer and a band. For about two bucks you could get loaded and listen to music. We always did OK with those. We hired the Rockets and other local bands. Later we rented the Boblo boat and I think we hired the Kids to play. That was a pretty good one too.

Once I found out that Whitey was Robert Jr. Whithal, I contacted him and he provided me with a scan of the poster, seen below. Robert is editor of Big City Rhythm & Blues magazine, and I've known him for years; just didn't know he was Whitey. Small world! 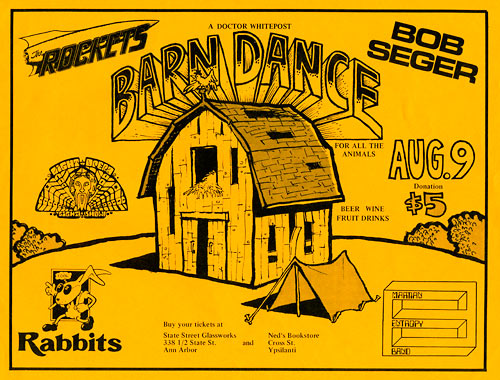 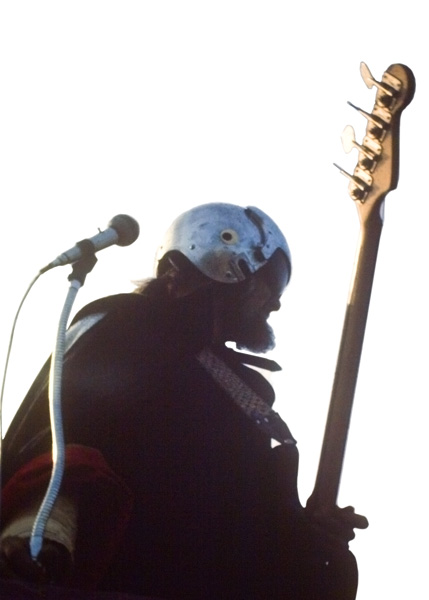